I have some great news to share – Smarty Pants has been named Chicago’s Best Party Entertainer in Nickelodeon’s Parents Picks 2010 Awards!

The Nickelodeon Parents’ Picks Awards is an annual, nationwide online poll that allows parents to vote on their favorite family friendly places, products and services. The voting took place this past summer in 2010 and I just learned that Smarty Pants has been voted Best Entertainer in the voting!

Thank you to all of our clients, friends, and Smarty Pants fans for voting in the contest. I couldn’t have won without your help!

In addition, WGN-TV actually ran televised coverage about my “Vote Smarty” campaign in August, mentioning the voting during their August 24th morning news broadcast here in Chicago. Their coverage starts at about the 1:00 mark in the video below.

I also sent out postcards asking people to vote. Hang onto them – they’ve become a rare collectible! 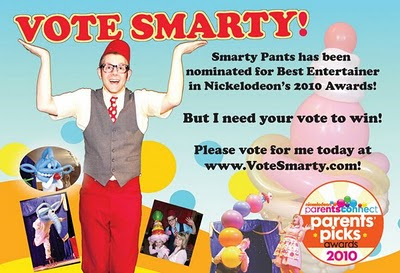 Thanks again – I promise in my reign as Best Party Entertainer, I’ll make sure to uphold the highest standards of professional entertainment quality, service and creativity!