Smarty Pants Turning a “No” into a “Yes!”

Posted on September 2, 2012 by smartyadmin

When I first started performing the Big Balloon Show in public libraries across Illinois, I regularly got asked for balloons after the show by audience members.    I would have to decline – it just wouldn’t be fair to give one or two audience members a balloon, without giving a balloon to everyone.    While my refusal made logical sense, I had a lingering feeling that I wasn’t quite satisfying a need in my audience after the show’s end.

Since starting my career as Smarty Pants, I attribute a large part of my success to the belief that I can always change a “NO” into a “YES” – no matter what the circumstances. So, naturally I tried to apply that same philosophy to myself as well to external situations. How could I stop saying “NO” to audience members and say “YES” instead?

The answer was obvious.    I originally began performing the Big Balloon Show because I found it impossible to make a balloon for every single guest at a fair, festival or public event, but I could entertain an unlimited amount of kids with a stage show.   Why not use that same “entertain everyone” principles for my show?

The idea finally came to me.   I can’t give everyone a balloon after the show, but I can give them a more lasting souvenir – a photo with the Big Balloons, taken right after the show.    So now, after every performance of the Big Balloon Show, Smarty Pants always sticks around to take photos with the audience.   No matter how long it takes – five minutes or fifty, I’m glad to personally thank every audience member for attending my show with a smile and a photo.   And I realized, THAT’S what the audience wanted when they asked after the show- not a balloon, but a lasting memory!

Here’s some photos taken after our recent performance wrapping up the 2012 Summer Reading Season at the Frankfort Public Library.    Check out www.smartypantsworld.com to see when the Big Balloon Show is coming to you and hopefully you’ll be in the next batch of photos! 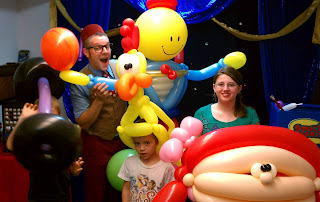 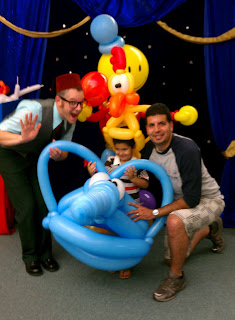 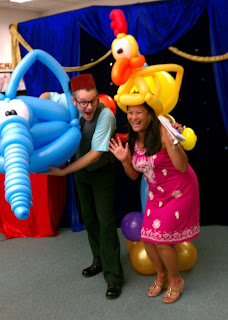